Characters I Would Like to Play (Again): Kaito Yamada (AdEva/Kuro)

Kaito was an original character I created for a forum/IRC-based Neon Genesis Evangelion RP several years ago. Since all of the canon characters I wanted to play were taken, I decided to create a classmate of the Evangelion pilots. Since I was watching Veronica Mars and had also re-watched Brick recently, I decided I wanted to play a teen noir-style detective.

Over time, he developed as more of a teenage Mulder than a gender flipped Veronica Mars expy, as the mysteries that he investigated tended to either be J-Horror inspired paranormal phenomena or top-secret NERV experiments gone rogue. And despite the risks of placing such a character amongst the canon characters, he turned out okay as a supporting character. and I later exported him to an Adeptus Evangelion campaign as a pilot. Sadly, that campaign ground to a halt.

However, if the opportunity ever presented itself, I'd like to try playing as Kaito again; this time as a character in the Kuro RPG setting. Here's my write-up of Kaito for Kuro. 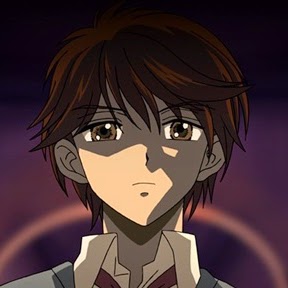 Background: Kaito is the son of Yamada Daisuke, an inspector with the Shin-Edo police. Kaito moved to Kyoto with his mother at the age of 3, after his mother was forced to give up his newborn sister for adoption. His mother resented his father for allowing this to happen, and Kaito shared her feelings on the matter.

8 years later, Kaito’s mother was murdered; her killer was never apprehended. With no other family to take him in, Kaito was placed in his father’s custody.

Although Daisuke has tried to mend bridges between them, his work keeps him busy, leaving Kaito to his own devices.

Despite his bitterness towards Daisuke, the loss of his mother and her killer’s escape from justice has inspired Kaito to follow in his father’s footsteps.

Since returning to Tokyo, Kaito has become reacquainted with his childhood friend Idane Kimi, a Miko in training whose uncle is a colleague of his father's. As strange things continue to happen in Tokyo (now Shin-Edo) in the aftermath of the Kuro Incident, Kaito has joined Kimi's new student club, the Fortean Investigation, Research and Exorcism Brigade (or F.I.R.E. Brigade, for short), dedicated to investigating the growing levels of supernatural phenomena in the city, and serves as its vice president.

While his reasons for joining are mainly to spend more time with Kimi, he is also curious about the paranormal, particularly because he has come to believe he is being haunted by a spirit which may or may not be the ghost of his dead mother...
Posted by Treb Ruddahan at 8:51 PM

Check Out These Sites